To continue the train of reviews on software developed by LSoft Technologies Inc., I'll be reviewing one of their core products: Active@ Boot Disk. What this software proves itself to be is a powerful disk utility tool that allows the user to create a portable, working bootable disk that can be used to start up any computer, even without an operating system or drivers installed. 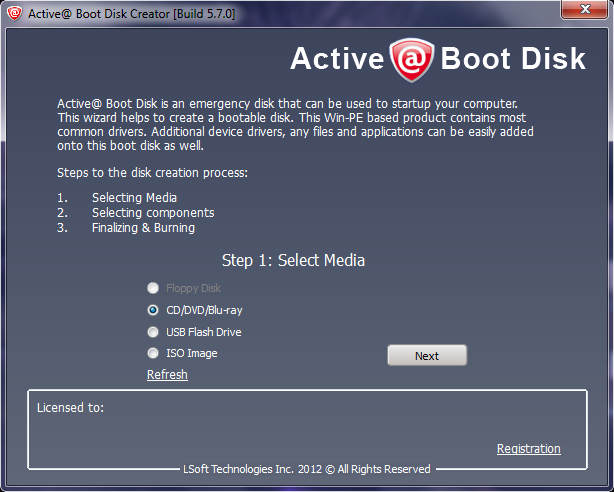 In case terms like "bootable disk" sound strange and foreign to you, I'll quickly explain what this software does. Basically, you can load a full, functioning operating system with basic drivers, software and functionality onto any sort of portable media, such as an external hard drive, CD/DVD/Blu-ray disk or USB.

This means that you can boot up any computer with that "boot disk", instead of whatever hard drive it usually loads off of.

You can then do whatever you want to your computer, fix problems your computer is having, recover any lost files that you have trouble accessing, or even back up your computer and carry all of the data on your hard drive over onto a new one if your current hard drive is having problems. Because of its' ability to create an "emergency device", Active@ Boot Disk complements Active@ Disk Image (another software I will be reviewing very soon) very well.

As you can see by the image of the start-up screen above, the steps to using this software are clearly outlined and are fairly straightforward. You connect your storage device of choice to the computer you are running Active@ Boot Disk on, and then follow the instructions to create an emergency "bootable disk". In the course of several minutes, the software is loaded onto your CD, USB or whatever you choose to use and it's ready to go.

When actually trying to use the bootable disk, however, you have to be careful to make sure that your computer loads from the storage device, rather than its' default setting, which is loading from your main hard drive. Generally, when starting your computer, hit the F1-F12 keys and you should be able to figure it out from the BIOS screen there. For me it's f8, but I know it really depends on the computer.

From there it's simple; your computer loads what appears to be some sort of version of Windows with a slightly different look to it. There you can do basically anything you can do in Windows. There is even an internet browser that comes pre-installed in case you want to browse the internet. It doesn't have any of the programs you have installed on your computer, but you can access them by browsing your computers' the hard drive.

This is a great program that can be used in conjunction with other software to fix computer problems. Sort of like restarting in "Safe Mode", where everything works and you can do anything you want to your computer. With a ton of handy uses, I would recommend Active@ Boot Disk to anyone who may find it useful. I use it when I'm backing up my computer and I'm very pleased with it. I'll get to that in my next review of Active@ Disk Image.